If you live in a cold climate like I do, one of my favourite things to do when the balmier temperatures hit is to dine al fresco! Somehow dining, & having a cocktail outside, are one step closer to being in paradise!

Luckily, Toronto, where I live, has tons of places to hang out at outdoors. A couple of months ago, on my birthday, my sweet son suggested we go out for lunch to celebrate. We chose the perfect spot: Chef Claudio Aprile’s “Origin North” (at the fashionable Bayview Village Shopping Mall) – a little piece of heaven. We sipped on, probably, the most delicious and exotic sangria I have ever had. Infused with some Vitamin D from the bright sun, we were energized and felt like we were transported far away, at least in our minds.

My son & I on the terrace of Origin North

“One” at the Hazelton Hotel is a place to see (celebrities and the “in” crowd) and be seen. This luxurious restaurant/bar is situated in the perfect spot for people watching, on the corner of Yorkville & Hazelton. When TIFF (The Toronto International Film Festival) used to take over Yorkville, getting a table was next to an impossible feat. Even though the festival moved to downtown/King Street and its environs a few years ago, One still dominates in chi chi Yorkville.

My son on his 18th birthday last year at One

Sassafraz, corner Bellair and Cumberland, is another iconic Yorkville favourite. Best seats are, naturally, outside where you get to watch all the action, including the friendly bikers showing off their choppers!

My hubby taking in the sights on the Sassafraz terrace

The scene on Bellair in Yorkville on a Saturday Night

A few weeks ago I got back from the city I grew up in – the North-American European jewel in the crown of Canada: Montreal. It was during the International Jazz Festival and I was fortunate enough to see the legendary Tony Bennett in concert with surprise guest, my favourite – Lady Gaga! (9 days later I was fortunate enough to see her again in concert in Toronto! Yes, even at 54 years of age I consider myself one of her “little monsters.”). Tony Bennett said Gaga was the greatest female jazz singer on earth today and I believe him! (Countdown is now on until they release their first collaborative Jazz CD together on September 23, 2014). Earlier that day, my mom and I were meandering around the Plateau area on St. Lawrence Blvd. (nicknamed “the main”), a street made famous by immigrants and now still populated with newcomers, but also home to students, hipsters, the artsy crowd, and a vast demographic of all kinds of people! Some of Montreal’s trendiest restaurants are in this gentrified neighbourhood. One establishment that has stood the test of time is the earthy, bohemian Cafe Santropol. How lucky can a girl get? During this trip to my hometown, I had the privilege of visiting and dining at Santropol with my mom. We had lunch in the garden and it was pure heaven. Through a window on the side of Santropol, I was able to see the triplex my parents lived in in the 1950’s and where they had their first-born, my brother Bernie, on rue Esplanade. How ironic that my younger brother, Stephen, moved on the same street years later! All the immigrants wanted to get out of that neighborhood as soon as they could, and all the younger generation wanted to move there because it was so hip! 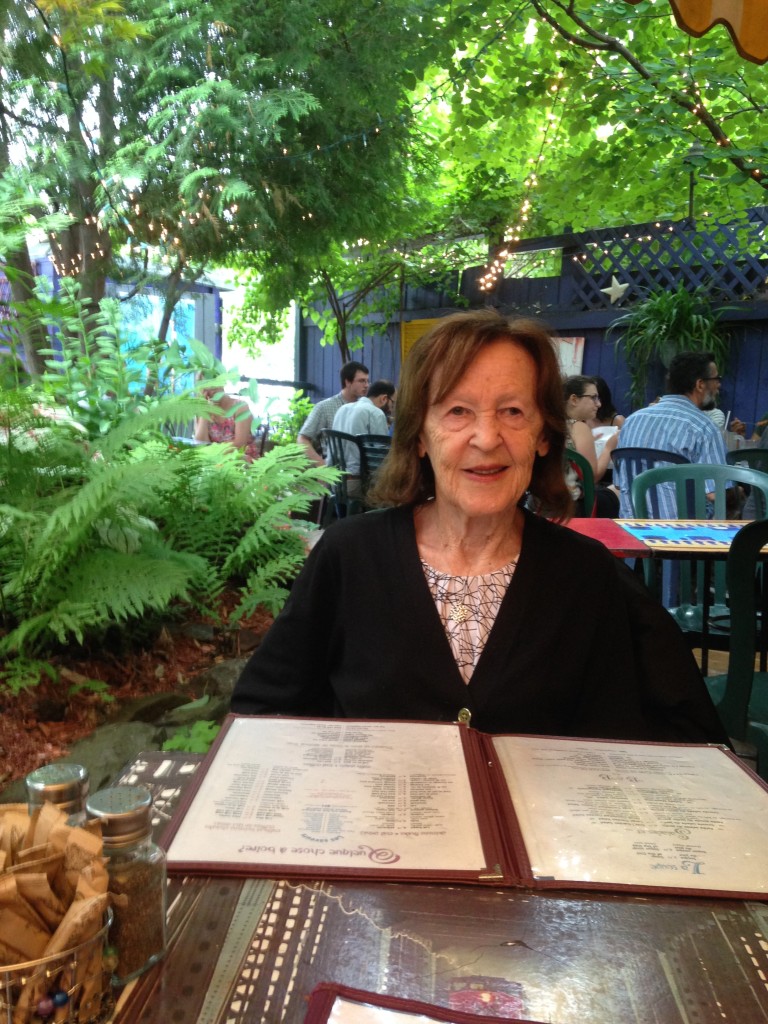 My mom in the garden of Cafe Santropol

The 3rd floor balcony is where my mom, dad & brother, Bernie, lived when he was born (this is the side view of the house on rue St. Urbain)

Although my most cherished restaurant in Montreal – the legendary Moishe’s Steakhouse – does not have a terrace, I nonetheless couldn’t talk about my hometown of Montreal without mentioning it. For as long as I can remember, Moishe’s has had a special place in all of my family members’ hearts and is a venue where we always celebrated, and still celebrate, very special and milestone occasions. It has been a Montreal landmark since 1938 serving the city’s (and some of the world’s) highest quality and tastiest steaks, along with a myriad of other decadent dishes, including their famous coleslaw and pickles. Moishe’s also resonates with my family because when my parents both arrived in Montreal as refugee orphans/child Holocaust survivors from Europe in 1948, my mother lived with the family who owned the building that Moishe’s is housed in. Mr. Lotansky would take my older brother to Moishe’s during the daytime just to check in for business matters and my brother would always be treated to a fancy late 50’s/early 60’s child’s cocktail. To our surprise, when I was just back in Montreal with my family to celebrate my husband’s and my 30th anniversary at Moishe’s, there on the wall was an old photograph of Moishe himself with Mr. Lotansky. It brought back so many memories!

Sadly, when late fall and winter descend upon us Canadians, after we’ve sapped the last drop of al fresco living out

of the city (lots of restos have heaters on their patios until the first snowfall!), we reluctantly crawl back indoors and hibernate until the following spring when terraces, gardens, and outdoor patios come to life again. Until that time, I, for one, like to gaze upon one of the beautiful paintings that adorns my office in our home – an exquisite, colourful French garden, painted by the lovely and talented Toronto artist, Jane Hall. This was my husband’s and my first piece of real art that we bought when our son was born 19 years ago while still living in Montreal. Jane shipped it to us via Greyhound bus and we have enjoyed it ever since. Just beautiful!

Our lovely Jane Hall Painting purchased in 1995 – our French Garden!

So many patios, so little time (especially up here in the north)! However, whatever your remaining plans are for the rest of the summer (which is unfortunately getting shorter & shorter), make sure to spend some quality time breathing, living, feasting, drinking, playing, etc. in the great outdoors. If you live in Toronto, be sure to check out blogTO’s “The Best Rooftop Patios in Toronto,” “The Best Restaurant Patios in Toronto,” or “Best of Patios Guide” before it’s too late!!!

Please feel free to share your favourite al fresco spot wherever you live! I’d love to hear about it!

Until next time, Hugs & Kisses from The Pomegraddict

What this blog is about

Welcome to my lifestyle blog. Why Pomegraddict? I’ve always been fascinated with the sensual pomegranate – the colour, texture, shape, taste, and spiritual connection. Every time I see this luscious nectar of the gods, it does something quite positive to me. This unique crimson-red burst of energy kissed by the sun has a way of instantly raising my serotonin levels. I'm addicted!

This is what I want to write about and share with my readers: how life can be exciting, alluring, mysterious, and uplifting every day, like the effects of the pomegranate on me! Whether you’re driving with the top down on your car, donning your Audrey Hepburn shades, or in your kitchen preparing dinner for your family….wherever you may be, may the magic of the pomegranate fill your heart with love, and may you get as addicted to life as I am!

Guest of a Guest

What Jew Wanna Eat - This Aint Yo Bubbe's Blog

Hi there! I’m Pomegraddict but my real name is Joanne.

I love being a mom to the two most incredible children.
I love writing.
I love events and living life to the fullest.
I love pomegranates.

This lifestyle blog is a hobby of mine. With all the bad stuff going on in the world, it’s sometimes hard not to feel down, discouraged, and pessimistic about all the great things that also exist. I am always looking for ways to raise the spirits of others and myself. That’s why I began my blog. I love to write about trending topics, and also, about exciting events I attend and events I organize both personally and in the corporate realm, for HighVail Systems Inc. My experiences are mainly in Toronto (where I live) and Montreal (my hometown), but also cover many of the places I travel to.

Disclosure policy: Pomegraddict is a personal blog written and edited by yours truly. The views and opinions expressed on this blog are purely by the blog owner (moi). I am not an expert on any topic; just a passionate, enthusiastic writer who wants to inspire and uplift my readers! This blog does not accept any form of cash advertising, sponsorship, or paid topic insertions (unless of course you’d like to offer the foregoing; in which case I’ll change my disclosure policy accordingly!)! However, I will accept free products, services, travel, event tickets, and other forms of compensation (including pomegranates!) from companies and organizations. The compensation received will never influence the content, topics or posts made in this blog. For questions about this blog, please contact joanne@highvail.com