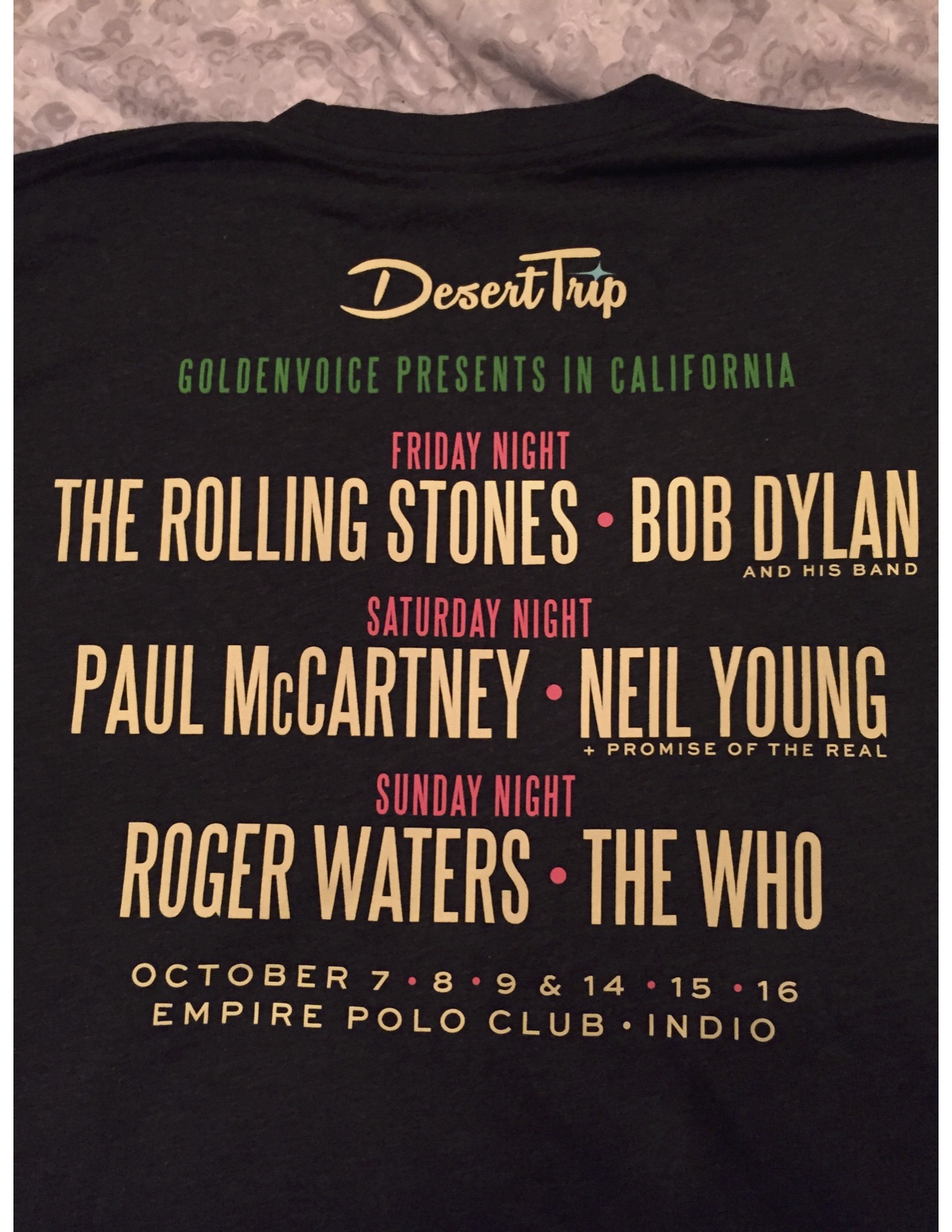 In May 2016, a very exciting announcement was made: Desert Trip, a 3-day rock ‘n roll extravaganza, was to take place in October at the same venue (The Empire Polo Club) as the renowned 7-year-old annual Coachella Valley Music & Arts Festival in Indio, California, in close proximity to the luxurious desert oasis of Palm Springs. Coachella brings in close to 200,000 people over two weekends and features rock, hip hop, independent, electronic dance & indie music/bands and attracts A-list celebrities and a mostly millennial crowd sporting the coolest boho-chic clothing.

Desert Trip is produced by the same entity as Coachella – Goldenvoice – and would feature the “concert of the century” featuring the biggest names in rock ‘n roll over the last 50+ years: Bob Dylan, The Rolling Stones, Neil Young, Paul McCartney, The Who, and Roger Waters. Following the same format as Coachella, there would be two weekends of Desert Trip as well, attracting 75,000 fans to each.

I thought, what an awesome event, but certainly wasn’t going to go – too far (we live in Toronto); too expensive; too out of reach…. And then, as if reading my thoughts, the phone rang. It was our close friend Dave calling to tell us that he and his wife Arlene were turning 50 shortly and were looking for something unique and exciting to do. They had heard about Desert Trip and immediately thought of us as their partners in crime to attend this wild weekend. Before Dave could finish his sentence, my hubby, Bradley and I screamed yes! The deal was sealed!!

Tickets went on sale a few days later. Dave and I were in our respective homes armed with our Mac’s and ready to book. We both got in the queue on-line and waited with nervous anticipation to see when the little man/emoji on our screens was to enter the line to buy tickets. We knew the tickets would be sold out in no time and we had no idea if we would be able to grab any. It was nerve-wracking to say the least! All of a sudden, my little man jumped to the next screen and I was in. Every time I put my X on the seats that appeared to be available, they would be taken. So many people all over the world trying to get these coveted seats at the same time! I jumped a few rows down and….it happened! I pinned down 4 seats!! Hoping there wouldn’t be a glitch by the time I checked out, I proceeded with baited breath to check-out. Then I did the crazy dance and let everyone know the tickets were ours! We would be going to weekend two (October 14, 15, & 16). Dave then went through a similar experience trying to book a place for us to stay at and also nabbed anything he could get his hands on. Flights and a car reservations were next and we were booked!

At the end of September, we received our aptly decorated little “magic box” by Fedex with the “stash” inside – info book, lanyards, tickets, parking pass, info, and even a Disneyland-like viewfinder with pictures of all the musicians we would see.

We sat down for brunch a few days before Operation Desert Trip and planned out our pilgrimage.

Brunch, and at the head of the table, the magic box.

I had always been upset that I hadn’t been old enough to attend Woodstock in 1969. I would have so relished sleeping in the mud (not really!) and listening to the legends of the sixties. Unfortunately, the famous lyrics The Who sang at the time…”Hope I die before I get old” really held some eery foreboding for some of the greats of that era – Janis Joplin, Jimi Hendrix, Jim Morrison of the Doors, and others, whom the world would lose soon after their 27th birthdays. This journey to Desert Trip was going to be my/our Woodstock, only no mud, nice accommodations, upscale food and libations, and seeing these die-hard rockers who had made it way past their 27th birthdays and were still going strong!

What to wear??? I bought this new boho hat and found my old Frye cowboy boots and Rolling Stones shirt from their last concert in Toronto!

It’s no surprise that I didn’t sleep for almost a whole week before our journey to Indio. The excitement was too much to bear! I just knew this once-in-a-lifetime experience was going to be everything I was dreaming of and more.

And finally, the day was here! We got to the airport, flew to L.A., picked up our rental car, and we were off to the Desert!

We arrived at our quaint little hotel in Palm Desert, not too far from the venue. First things first: to start the mega weekend on the right foot, as soon as we got our rooms, California wine and boozy cocktails were poured.

Our friend Arlene & I (L: Moi; R: Arlene) waiting for our rental car with our little bottle of vodka! The party started right at the airport!

The boys (L: Dave; R: hubby Bradley) next morning at Ralph’s Supermarket picking up breakfast before the event of a lifetime!

Next up: “the experience” – A (Desert) Trip Down Rock ‘N Roll Memory Lane in Indio, California – Part 2.

Hugs & Kisses from The Pomegraddict

What this blog is about

Welcome to my lifestyle blog. Why Pomegraddict? I’ve always been fascinated with the sensual pomegranate – the colour, texture, shape, taste, and spiritual connection. Every time I see this luscious nectar of the gods, it does something quite positive to me. This unique crimson-red burst of energy kissed by the sun has a way of instantly raising my serotonin levels. I'm addicted!

This is what I want to write about and share with my readers: how life can be exciting, alluring, mysterious, and uplifting every day, like the effects of the pomegranate on me! Whether you’re driving with the top down on your car, donning your Audrey Hepburn shades, or in your kitchen preparing dinner for your family….wherever you may be, may the magic of the pomegranate fill your heart with love, and may you get as addicted to life as I am!

Guest of a Guest

What Jew Wanna Eat - This Aint Yo Bubbe's Blog

Hi there! I’m Pomegraddict but my real name is Joanne.

I love being a mom to the two most incredible children.
I love writing.
I love events and living life to the fullest.
I love pomegranates.

This lifestyle blog is a hobby of mine. With all the bad stuff going on in the world, it’s sometimes hard not to feel down, discouraged, and pessimistic about all the great things that also exist. I am always looking for ways to raise the spirits of others and myself. That’s why I began my blog. I love to write about trending topics, and also, about exciting events I attend and events I organize both personally and in the corporate realm, for HighVail Systems Inc. My experiences are mainly in Toronto (where I live) and Montreal (my hometown), but also cover many of the places I travel to.

Disclosure policy: Pomegraddict is a personal blog written and edited by yours truly. The views and opinions expressed on this blog are purely by the blog owner (moi). I am not an expert on any topic; just a passionate, enthusiastic writer who wants to inspire and uplift my readers! This blog does not accept any form of cash advertising, sponsorship, or paid topic insertions (unless of course you’d like to offer the foregoing; in which case I’ll change my disclosure policy accordingly!)! However, I will accept free products, services, travel, event tickets, and other forms of compensation (including pomegranates!) from companies and organizations. The compensation received will never influence the content, topics or posts made in this blog. For questions about this blog, please contact joanne@highvail.com